Norway, Chile and France: film and TV from across the world (aka Jackpot, No and Spiral)

Norway
Friday night we indulged an an incredibly silly film called Jackpot - a Norwegian dark comedy thriller based on a story by Jo Nesbo (whose Headhunters we so enjoyed last year).

Jackpot has almost nothing new to add to the catalogue of 'numbskulls + money = violent comedy' films.  But it *IS* enormously entertaining if you like your comedy bloody, stupid and bloodily stupid.

Now what the UK trailer UTTERLY fails to convey is this humour - which frankly is very much the best part of the film.  It is a bit clearer in the original trailer:


I'd recommend this film to anyone who can cope with bloody humour and savage stupidity.  And for me the film is summed up in two exchanges during the film.

Chile
As a good contrast - and with a title ripe for circular conversations - Saturday saw us use our first lot of Membership tickets for the Broadway for 2013 ("Yes, we are going to the cinema", "what to see?" "No" "I thought you were going to the cinema?" "Yes: No" "what?!")

No is a fictional telling of events in Chile in 1988 when the plebiscite allowed both pro-Pinochet and anti-Pinochet campaigns.  It uses techniques and stock to look like it was filmed in the 1980s and is in turns funny and horrific.  It's about marketing, about politics, about change and about the extent to which marketing can ever really understand what politics really means (look for the appearances of mime).


The naive Rene finds himself inside events that are scary and awful even as he is co-ordinating overly tall actors ("Chileans are small people" he is chastised) and dance routines and group singing (which are resolutely NOTHING like 'We are the World').

The references and the technology don't jar as they can with movies about earlier periods, because the filming is rendered in a way to take us back to that moment.  It's both soothing and unnerving because as stories are, it was no where near as simple as a jingle and a rainbow would make this out to be.  But it is powerful and moving.  And if someone finds out more about Chile - then, before and now - from seeing this film, that will be a good thing.  Up for an Oscar as well...

France
Didn't get chance to sing the praises of this returning gem last weekend, but the return of Spiral (aka Engrenages) is MUCH welcomed in our house.  Another resident of BBC4's Saturday 9pm 'foreign TV' slot* Spiral has been on our radar since the ever-reliable MediumRob pointed us to it a few years ago and continues to be our go-to-dude for all things Spiral.  This is now season 4 and we love it and have been eagerly following the characters and storylines from S1.  Laure Berthaud and Josephine (definitely no longer Jo) Karlsson are two of the most wonderful female characters.

With praise and cult-following in the UK, you'd think that BBC4 would be trumpeting this from the rooftops to alert viewers to it's return, but heck it pretty much even snuck under OUR radars when it came back last week.


This is such a shame as it is a really good series and worth investing time with.  Yes: it IS violent.  But no more than The Wire (and certainly lightweight compared to Jackpot).  But there is another value to it and that is the never comfortable drama it presents regarding the French justice system and the relationships of its citizens, residents and others to the state and each other.  This means that politics, law, race and gender are never far from consideration within the spiral that is Engrenages.  Welcome back: already desperate to see next week's episodes... In the meantime, the incredible Audrey Fleurot (Karlsson) and Caroline Proust (Berthaud). 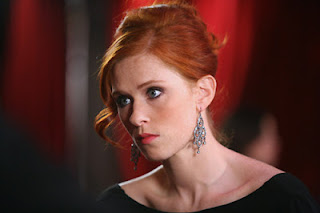 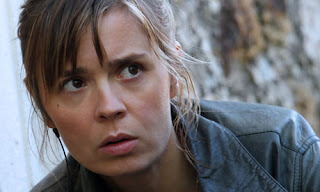 
* though do wish they'd skip the 2 hours a week routine.  Some of us have lives!

Posted by Lisa Rullsenberg at 5:32 pm

Spiral is excellent isn't it.Sky Arts has a number of good European progs too.Did you See the Romanzo Criminale? I thought Hard was quite funny

One endeavours to spread the word about good shows ;-)

A catch-up with a bunch of things you have been doing. Most of which we will never see in the US - if it's not dubbed it usually isn't shown anywhere.

Joe - this is where the land of DVDs and dowloads can be helpful.

Jams - don't have Sky Arts (at the mo), but am considering changes /upgrades to what digital services we have (cannot face the trauma and expense of changing supplier to BT/Sky, but may be able to deal with changes to our Virgin agreement).

*sigh* of course, all moot as Virgin bought out recently of course...