Of course Sunday for me was all about the Choir (see other post), but there were still some musical highlights to accompany live performing by a collection of people who had 4 hours to rehearse 6 songs (as opposed to 12 weeks to rehearse 10/11 songs as with BeVox!  Though obviously the BeVox standard is able to be MUCH higher).

Anyway: Sunday at Summer Sundae started with breakfast at the Lansdowne before we wandered in for a cuppa tea.  Sadly this meant we missed having spotted in the programme small print that there was a Barbershop a cappella band called the Simpletones singing in the tent.  Boo - would have liked to have seen them properly, especially as I later found them serenading Neil with a rendition of the 'Ghostbusters' song as Neil was wearing his 'Last Exit to Nowhere' t-shirt!

We saw The Staves - three sisters who sweltered under the hot lights of the tent.  They were fantastic and wonderfully harmonious, but there were some hilarious moments as whistling was revealed as a substitute for guitar-playing, and another confessed she had sweat running down her back.  "We usually laugh when we get offered towels for being on stage - not today" they said.

It was also possible to catch Team Me, another Scandi highlight of the weekend.  Great tunes and harmonies and quirky sounds and titles.  Liked it a lot. 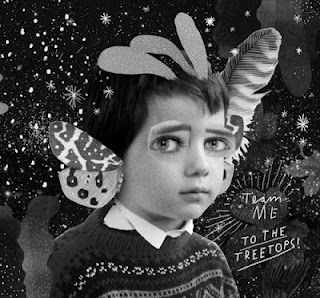 One of the benefits of getting backstage to go onto the main stage for the choir performance was seeing John Lydon wheeling his suitcase from the tour-bus... 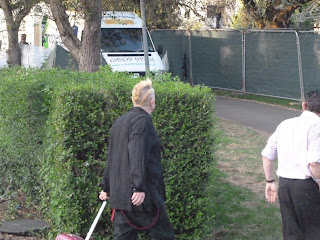 After the choir, Neil and I caught the end of Billy Bragg's tribute to Woody Guthrie (hurrah).  Always good, and the infinite flexibility of "Waiting for the great leap forward" came through again.  Always able to be updated: "Some people say that girls should be quiet; I wanna say 'Free Pussy Riot'!"

Anyway, apologies for anything missed: I'll aim to finish this post asap.  Apologies for the delay so far!
Posted by Lisa Rullsenberg at 5:30 pm