What better way to spend your lunch break than watching 'The Kidnap Diaries'? (as was broadcast on BBC4 last night). 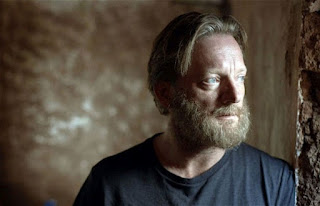 Okay, so it may not be everyone's first choice of lunchtime activity but it was a damn fine way to spend mine.

Douglas Henshall plays Sean Langan, a journalist whose bravado gets the better of him when he think he is getting an 'in' to go beyond just meeting the Taleban (which he had previously covered in documentaries) and would now get into the training camps of the Pakistan/Afgan border areas.

It takes Langan a little while to process that he is not 'waiting' for approval to go to the training camps, when he is led - blindfolded, at gunpoint - to be shut in a small room.  Sami (Jimi Mistry), his translator who arrives to join him a day or so later, is self-aware more quickly (and, for a while at least, Sami quickly goes off the rails into despair).

They're not getting anywhere close to the training camps: they'll be lucky to escape with their lives.

Langan is perhaps the classic journalist risk-taking - passionate about what he does, a 'fearless journalist' as he often describes himself in the flashback sequences of him with his children, telling them the stories of the 'brave journalist'.  Henshall's a great choice for this role: never less than impassioned, he captures the mercurial daring and excess of Langan's journalism and life before the kidnap --- and most beautifully his horrified realisation of what he has got into when he is locked into the small dark room he and Sami are kept in.  Henshall is at his best when at the edge: the scene where he refuses to give the Taleban commander the names of his children is heartbreaking (and it is regarding his children and their ever seeing this drama that Langan himself still struggles over - as seen in the interview with Mark Lawson also shown on BBC4). The figure of Langan/Henshall crashes and burns, flying too close to the sun, and the fairytale tales of 'daring-do' that are told to his children on the sofa come to haunt the period of imprisonment.

There have been far too few reviews for this excellent drama - The Telegraph, Metro - but its deserves plaudits for its excellent portrayal of the madness of journalists and the horrors of near-death captivity.  We are shown the humanity and pressures of the family to whom the Taleban entrust their prisoners (Gul Jan, played by Andreas Karras) as well as the captors themselves.  Mr C, played by Ramon Tikram is terrifying in his relaying of messages from higher up the command - the possibility, probability, of death - all delivered with 'friendly' side-helpings of "bloody good stuff, Mr Langan".  The captors have little idea what to do with their quarry and verdicts of guilt are proffered and rescinded, only to be replaced by sentences of death, followed freedom.  Everything is qualified, edged, uncertain.

It's a rollercoaster of the worst kind.
Posted by Lisa Rullsenberg at 1:29 pm