If you have seen the cover of this book you will probably have been tempted to pick it up. 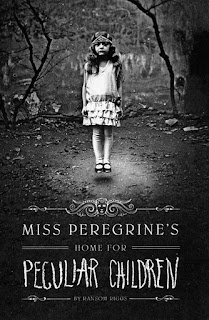 If not: what the hell is wrong with you?

Anyway: we picked up Ransom Rigg's debut novel Miss Peregrine's Home for Peculiar Children in San Francisco and I have to say I've been itching to read it since then. Today I finally settled down to it and devoured the whole thing in the afternoon. I'm almost certainly going to read it again as there is much to be gained from a re-read (I kept skipping back to re-read sections even as I read it - not because I was confused but because I loved the way that things had been conveyed - the choice of phrasing, the imagery created...)

Amongst its many pleasures are those granted by the inclusion of several photographs to 'illustrate' the narrative. They are wonderful finds and add an extra whoosh of disconcerted meaning to the tale and its characters. To say I was left wanting more, MUCH more, would be an understatement.

I don't want to say too much about the plot - there's a grandson and a grandfather and some very peculiar children and beyond that would spoil the thrill of its development. However, what I can say is that it is resolutely and almost certainly NOT the sort of story you think it is going to be and it subtly shifts gears on several occasions, making you think 'how did I not see that?'

It is magical, mysterious, heartening, thrilling and adventurous. I'd recommend it to young adults, but with its use of history I'd also anticipate some (much) older readers to fall for its many charms.
Posted by Lisa Rullsenberg at 6:07 pm

Hey, there's so much useful material above!
games online