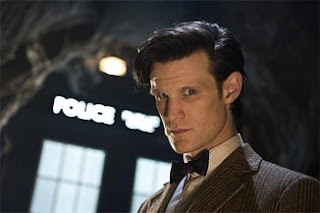 Belatedly completed I know - but Blogger kept eating the post (or Firefox turned my text into Alien Form Shakespeare).
Anyway I was glad to find that SOMEONE liked the end of Doctor Who season 6 / Fnarg plus 1 / season 32 (Thanks On The Box). And even MediumRob was fine with it having been intermittently disappointed by the 2011 two half series.

And guess what? I liked it too.

In fact - as I noted everywhere - I applauded at the end. It just felt spontaneously right to do.

Some of the things I liked
Things I was less keen on
Still: It was just such a blast - and whilst lacking the glorious 'how-could-we-have-doubted?' oomph of The Big Bang/The Pandorica Opens, it was nevertheless a darn fine finale. I think part of the reason why it lacked that previous punch is tied to my floored reaction to the episode 'The God Complex' a couple of weeks earlier.
I'd got to the end of that episode - Amy and Rory's departure after an emotionally wrecking farewell to the innocent faith of Amelia Pond - and promptly felt like my stomach had been pulled out. I'd known that my friend would be watching it after first broadcast and worried frantically how she's take it. Once she watched it she immediately ended up texting me and we exchanged messages about how in bits we both were. The departure was both perfectly handled - companion departures don't NEED to be the crux of every finale - and utterly heart-breaking in its casualness, its ordinariness of them needing to go - of the Doctor needing them to go. He (had to) destroy that innocent faith - all too misplaced - of young Amelia Pond, and after that he couldn't keep the couple with him.
Which made the scene in the garden at chez Pond/Williams all the more lovely as mum and dad got some good news from their daughter to unravel the wibbly-wobbly-ness of Rover's timeline and relationship to the Doctor.
And I also loved the Confidential episode - full-length of course - with its timeline of River beautifully edited to make it clear to those who hadn't kept up.
What next?
Moffat - get a handle on show-running. RTD had many faults but keeping all the balls of other people's writing for the series in check was a strong point. The inconsistencies of tone and portrayals between writers are just a bit too glaring sometimes. Whip them troops into line. And whilst I appreciate you getting the show into the autumn period, I'm not best keen on the 6-7 episodes a season set-up. But I'm being greedy I know...
Smith - if you haven't already, get your exit strategy planned. I love your portrayal of the Doctor dearly: far more than my Tennant-love thought possible (but which I hoped would be won over by my inner-geekness and long-term love for Doctor Who the series). Nevertheless, there's an anniversary coming up and you need to know how to get out of being sucked into 'what comes next'. Doctor Who will be forever - in some form, some way - but it needs regeneration. In the meantime, keep giving this show the energy it deserves. You've made the part your own and it is a brilliant and dazzling thing to behold. Keep making it yours.
Here's to 2012 and to 2013. And beyond.
Posted by Lisa Rullsenberg at 7:53 pm

I liked it too - but missed the big (what is the question?) answer.
Didn't seem right though, time said the Doctor had to die, not a robot pretend Doctor. And did River end up in jail for killing the Doctor? What is his name? So many simple questions.