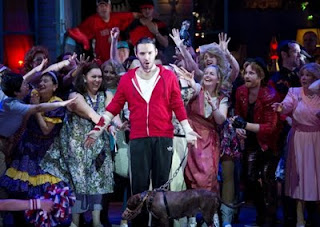 Right: first off, we enjoyed this. That may not seem radical but the accepted and touted view on this production seems to be a hearty thumbs down. Those who have bothered to review it have struggled to give it two stars and comments on the Nottingham version even complained about who was in the cast.

So how come we seem more charitable?

Well, Cloud hadn't been to an opera since he and I got freebie (review) tickets for the Welsh National Opera's production of Richard Strauss' Electkra at Birmingham Hippodrome back in 1992(ish). [I was working on the student paper and was pretty chuffed to get two VERY expensive tickets for the opera just to write a couple of hundred word review for the student paper]. I've been to various performances since, but Neil's been less exposed to opera. Then we were listening to 'Live from the Met' on Radio3 one Saturday - we often listen to the live opera if we're in and there's no Doctor Who on. Neil realised he rather liked Carmen, knew quite a few of the tunes, and so I booked for us to go to the Opera North production this spring.

It certainly isn't a production to win over the sort of audience who conventionally would attend the Opera North tours at Nottingham: it's modern, set in the USA and cuts some of the elements of the story (the smugglers).

But actually, barring a few jarring aspects - none of them crucial to the central action - this was a really rather good performance and a staging that was far more coherent than critics seem to have been prepared to allow. Criticisms have also been made of the conducting and musicianship: we thought they were great. It is worth remembering that the pit space in a provincial theatre is pretty limited so this is never going to sound like 'Live From the Met' or 'Live from Covent Garden'. Criticisms have even been made of the lead singers: our Carmen and Jose in Nottingham were Sandra Piques Eddy and Peter Wedd respectively and I thought they were vocally - and in terms of the acting - rather good. Certainly the quality of vocal performances were good clear and consistent [I recall seeing La Boheme at Nottingham a few years ago, and although it was as moving as ever, I thought that vocally the performer of Rodolofo was a tad weedy in strength.] Kostas Smoriginas as Escamillo - by far one of the most interesting characters in the narrative - was especially good I thought.

This was a signed and surtitled performance so there were a number of blind and deaf people in the audience: I'd be interested to know how the blind audience members found the production, especially with additionally audio-commentary through headphones.

Because, as indicated above, what I can acknowledge DIDN'T work about the production were some of the background elements, some of directoral decisions which mostly seemed gratuitous or just plain baffling.

* what was with the quivering old lady in the first act, wrapped in her blanket? She didn't DO anything, scarcely participated in the chorus singing and frankly was rather embarrassing. Portraying 'dementia'? Here? Really?

* mooning: oh please - it's not funny and I mostly felt sorry for the two blokes who had to do it. 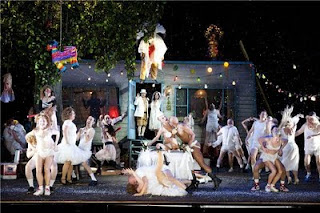 Not even slightly sure why...

* on which note, though Keel Watson made an imposing Zuniga, what was with the whiteface make-up he ended up wearing and his eventual lynching sequence?

I really don't want to come across as harsh as some reviewers - most reviewers. There was despite all these rough notes and sections some inspired moments: the adoration of the crowds for Escamillo, the ketchup blood and the swooning over being covered in this was a neat reading. In an opera whose gender relations are problematic to put it mildly, the portrayal of Carmen and Jose's complex relationship got away from the rather simple 'femme fatale' depictions usually given. And sometimes its good to NOT give audiences what they (think) they want: it's too easy with the traditional established operas to go with a setting that is comfortable for the audience. That won't always mean the original setting, modern ones can be as accepted, but things that take the audience out of their confort zone have to be at least tried.

In this instance, it probably hasn't quite worked which is a shame. But it was no where near as grim as some reviewers have growled and we nevertheless had a fine time attending.

Posted by Lisa Rullsenberg at 7:30 am

Really? See to me, that's rather like saying it's not 'real' Shakespeare if it's not done how we think (not know) it was done in the 16th century...