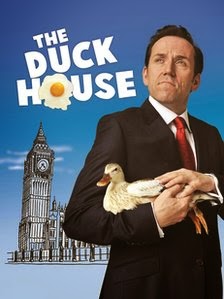 Farce is one of those beasts that potentially doesn't translate very well; what it has in its universal favour are of course the slapstick and visual elements.  Mixing farce and politics might therefore seem to be limiting the success of the translatable elements for jokes specific to audience knowledge and understanding - and in the case of The Duck House, recall of political history.

Thankfully, in picking as their focal point the MPs expenses scandal that occurred in 2009, a year before the last general election, authors Dan Patterson and Colin Swash (veterans of Mock the Week and Have I got news for you respectively) have identified a topic and political period that

a) most will have heard about (it was everywhere on the UK news right through til the election, and continues to be an issue)

b) lets audiences spot where political beliefs and stances have changed / not changed in the meantime (I expect Nottingham is not the audience who will be WAY ahead of a line about the integrity of the Liberal Democrats and Nick Clegg).

The choice of the MPs expenses scandal therefore still relies on drawing an audience inclined to care about politics, but in practice 'interested in current affairs/events' probably suffices.  The play is certainly 'apolitical' in its attacks on politicians, with no party coming out of the events clean (as was the case in the expenses scandal itself).  Satire would be too generous a term to describe the bones of the play, and so farce is what it is.

With lead Ben Miller - an active Twitter user - able to charm an audience from the moment he walks on stage (though even he looked a little taken aback at the Nottingham welcome he got for turning up), this is a very frothy production, but having Nancy Carroll as the MP's wife certainly brings some good acting chops to the production.  (Though she is given the dim housewife role, she conveys with aplomb a particular stereotype of politician's wife).

I'm loath to go into too much detail on the 'plot', or rather events, but it may help to say that there are all the desired elements one would want and expect from a farce and more:


The key thing is, "is it funny?" well, yes of COURSE it is.  Is it a scathing scabrous assault on politics?  Not in the slightest. Are the female characters underwritten?  As is often typical of farce, unfortunately yes - though as Ludmilla the Russian cleaner, Debbie Chazen* is superb, wring every ounce of ire from a character who has learnt all about British culture from the Daily Mail.

You probably won't want to meet Simon Shepherd face to face in the immediate aftermath of seeing the play (his character comes off worst for inevitable humiliation) but you'd have to either not get the political context and/or not find farce funny (which I accept is not a form of theatre everyone likes).  The production is lighter than air - and if taken on those terms possibly the most fun you can have whilst watching a panda suit and a nappy on stage.

*approaching midnight on Monday when I suddenly clicked that I'd seen her in Doctor Who Voyage of the Damned.
Posted by Lisa Rullsenberg at 1:02 pm