A week is a long time in culture: Thor - The Dark World; Richard II - Stratford final performance; the loveliness of David Tennant; and upcoming Doctor Who business

This time last week I was getting myself mentally prepared for some Avengers nonsense - Thor: The Dark World was hardly going to set cinematic history alight, but it was entertaining and worth the price of admission for the response to Loki in manacles (Tom Hiddleston). 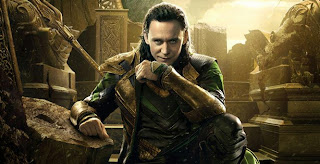 But in some respects, that was merely a prelude to the bigger event: by Thursday we had (finally!) got confirmation that our friend was (a) definitely going to be able to meet us in Stratford on Avon on the Saturday, and (b) would be at the final evening performance at the Royal Shakespeare Theatre for us seeing yet again Richard II.

Phew.  Palpable relief, especially as SHE had the tickets and I had been unsuccessfully trying to pay her back for these since February!

Meeting up after such a long time to have dinner together was lovely - lots of theatre talk, lots of Shakespeare talk.  Walking to the theatre, dressed in my finery was even better. 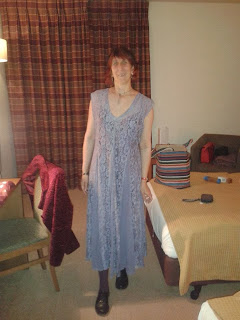 Getting INTO the theatre and finding that Row B seats 48 and 49 in the stalls is *really flipping close to the STAGE!!!!* was quite frankly almost more than our brains could cope with without proper preparation.

Yes, you really are VERY close.  You can see things at that distance that are less clear when further away. It remains a stunning production of this play.

And at the end: someone from the side of the stage threw on a bouquet of flowers and it landed perfectly in the centre; when it was picked up by David Tennant, he immediately turned, went down on one knee and presented them to the astonishingly wonderful Jane Lapotaire. I did not think I would be fortunate enough to see her on stage after her illness - her performances and that moment was sublime to enjoy.  I hope they raised a lot of money from the collections for the Philippines after both the matinee and final performance: I think they will have done.  I cannot imagine anyone not digging into their purse following a request from David.

It took a bottle of wine sat outside at the Dirty Duck til midnight, and then mucho hysterical conversation til about 3am, to even get CLOSE to calming sufficiently to sleep.  This week has therefore been punctuated by my mostly being a zombified teenager. Heck even my boss said on Monday "you look tired": I had to admit it was entirely self-inflicted.

Tuesday was choir day - penultimate rehearsal week for our local BeVox gig, with one more to come ahead of the big concert day 'A Circle of Life' on 7th December at Elsecar Heritage Centre.

But Tuesday was dominated by something else: a thanks-be to the graciousness of Mr Tennant.  Although initially confused by her text messages reporting tearful snottiness, that I "would know why", and that she couldn't talk, with a bit of untangling - mostly me getting the penny to drop - I finally worked out that this was a GOOD NEWS text.  I nervously asked "he did it?" 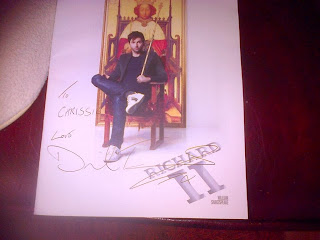 Bless you, sir: you are a prince, nay a KING amongst men and I thank you profusely.

It has taken a while to come down from that high of making a friend so very happy, but last night was pretty much a reminder that without planning things can go very wrong indeed.

Now some of you may have spotted that something celebrates 50 years of wonderfulness this weekend and there has been a fair amount of coverage.  (I also do not think it a coincidence that the final shows of Richard II were scheduled to finish LAST weekend, leaving this one nice and free for certain fans to sit and watch the celebrations).

So it was not a happy Lisa who found her TV remote/sensor not functioning last night on her (admittedly) VERY old CRT television just three days ahead of the big event.  We have been talking about replacing the hefty box one for many years and I have kept putting things off.  Finally it seemed that my procrastination had caught up with me and at just the wrong time!

Cue a frantic run out of the house at 8.30pm to buy a universal remote, batteries (proper bunny ones), and a new if small TV - with a wide screen so we don't miss the edges (as we do now).

I can breathe in time for the 23rd November.
Posted by Lisa Rullsenberg at 1:30 pm