This year, for a number of reasons, I won't be at the final day events of Lowdham Book Festival. Firstly, they've not got the major books fair they usually have on the final Saturday. *sad face* There are still talks and events going on next Saturday, but not the book fair. Secondly, it clashes with the 'lost Weekend' of DVD watching, so even if the event WAS scheduled as usual I'd probably not be going.

To compensate, we decided to go along to the Food Fiesta day they were having on the penultimate Sunday (24 June 2012) just across the road from Lowdham at Caythorpe Cricket Club. It helped that the lovely Kris and Dan (from Kris in Notts blog) were going along, and this would give us a chance to meet their son Sam who wasn't even beyond the womb when we last met up with Kris!

We arrived around lunchtime and were soon nosing around the goodies available - Neil got some Mr Trotter’s Great British Pork Crackling to kick things off (HIGH, high high in salt, but it's not as if he eats it regularly - once every two or three years?!)

I also picked up a couple of very fruity sticky teacakes from Hambleton Bakery - worth every penny spent on them for how delicious they were later that day at home with a cuppa tea. From the Gonalston Farm Shop stall, we got some super-fresh strawberries (had some last night, more on that in a mo), and Neil was tempted into some Bramley Apple compote which was sooooo charmingly sold to us by a local farmer that we couldn't resist. They also provided goats cheese (for me) and Shropshire Blue (for Neil) and we could have bought so much more as well... And because we endlessly find jars of harisa paste are too big to be eaten before going off, we picked up a tub from Taste - Gourmet Spice Company of harisa spices. We can add to tomato paste and make what we need as we need it!

We had a lovely time hanging out with Kris et al, and their friends (and their twin boys) whom we'd met at Kris and Dan's flat warming party back before they all had their children. It was a great atmosphere despite the floor of the marquee being squelchy wet in places from the torrential downpours of rain we've had in the UK. There is something fun about watching everyone chuckling over yogurt-smeared faced young toddlers!

In terms of reading matter, I picked up a copy of Nottinghamshire Flavours (local foodie mag) and Neil bought a book on baking so we may even get to more baking products over the summer. Well, we couldn't leave without something to read!

We did however resist the lure of the 'Jamie at Homeware' stand, having decided that Grayson Perry had been incisive enough about this tupperware party habit de nos jours.

To finish the day, Neil joined Dan and Kris at the Stilton and Port tasting event. It went on a bit longer than planned so I know Kris got a bit zoned out on the label reading analysis of Port types, but Neil enjoyed the cheese and learnt a fair bit more about Port and the different types you can get. I think he was glad to go to it!

Whilst we were sat in conversation, my view was blocked so I needed to be reminded about the cheesecake stall from Yummy Cheesecakes. Had to remedy that! Taking a taste, I immediately got a box of 6 small cheesecakes - milk chocolate, dark chocolate, two lemon and two blueberry. Neil and I had one each last night - he zingy lemon with a side helping of fresh strawberries, and me the dark chocolate one with strawberries on the side. 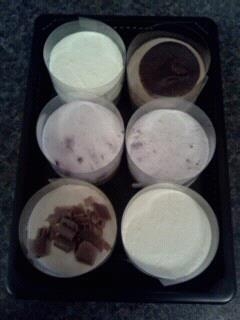 A very nice day and lovely to meet some nice people (Pippa of Five Leaves Press) and catch up with Kris and Dan and young Sam. And it was nice weather too!  I'll try and add some pics later but my camera battery is dedded at the mo so need to charge it so I can upload pics!
Posted by Lisa Rullsenberg at 8:55 am