The first time as tragedy; the second as farce: time-shifting 'Arden of Faversham' - Swan Theatre, RSC Friday 23 May 2014

Polly Findlay's new RSC production of the anonymous Renaissance play 'Arden of Faversham' shifts it from its usual 16th Century setting to a loosely 'modern' period.  Certainly, both Findlay (as director) and Zoe Svendsen (as dramaturg) are keen to emphasise contemporary parallels between the commodification of land, people and property then and now, and the shift of housewives from makers to consumers.  This time-shifting from the late 1500s to a modern but non-specific present day moment, seems to have thrown some reviewers, as if mentally adjusting from the outer gothic frames of the Swan theatre to a stage filled with the clutter of mass packaging for the contemporary consumer age (and fashions to match) makes the play text incomprehensible.  I'd argue that it is actually pretty easy to overlook lines that (rightly, for the 16th Century) make London feel a world away, since whatever London's proximity is now in terms of communications and travel, the capital can still feel a world away from provincial business and domestic life.

Grumbly Michael Billington, didn't like the period shift at all. Personally, I feel a period setting in Elizabethan costume would likely appear similarly artificial.  Nevertheless, there are elements that feel as if they are overstating realisations about 'capitalism for beginners'.  Arden's business is the distribution of tacky ornaments, not least an endless supply of marineki neko, the gold Japanese beckoning cats, symbolic of prosperous good fortune (oh irony when a wall of them is unveiled after Arden is killed). Arden's employees are engaged in drudgery: endless, pointless, mechanised processes carried out by humans for no particular purpose of adding anything to the product, experience or success of anyone (except Arden himself).  Work sucks; bosses are narcissistic and greedy; everyone wants a prosperous and more convenient life: we get it, with bright flashy clothes to ram the point home. 
But don't be deceived: what the play lacks in subtlety (in its production setting or the prose - no Shakespeare is this) or indeed length (it is a sprightly 1 hour 40, with no interval) it more than makes up for with some wonderfully portrayed supporting characters and a healthy infusion of verve and wit.

The tale may ostensibly be about businessman Arden (Ian Redford), his unfaithful wife Alice (Sharon Small), and her lover Mosby (Keir Charles), but the Arden employees Michael (Ian Bonar) and Mosby's sister Susan (Elspeth Brodie) - a hapless, servile, near-silent figure who regularly haunts the stage and production - keep getting our attention even as the play heads towards the inevitable murder of the titular character.  The tragedy is not really about Arden, for all that he meets an undignified death as the disposable body of capitalism: a domestic murder for domestic reasons.  Arguably, it is not even about the vivacious, capricious wife Alice, who all too late realises the enormity of her actions and choices.  Rather it is Susan and a would-be husband Michael that intrigue. 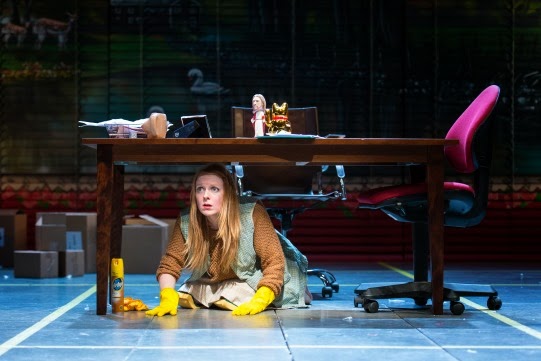 Susan: hidden, at the edges


Produced as part of the 'Roaring Girls' season at the RSC, the publicity has been all around Small as Alice Arden.  She certainly roars - with laughter, with lust, with anger and murderous desire.  But it is the mouse that doesn't roar who I keep thinking about: Susan.  Her brother Mosby tries to match her one way: with oily poisoner painter Clarke (Christopher Middleton).  Her mistress, Alice Arden, meanwhile promises her to Arden employee Michael.  Neither Mosby nor Alice seem especially concerned to consider Susan's own preferences, and it doesn't seem to bother either prospective husband much, with both Clarke and Michael careless as to whether Susan may have a role to play in her choice of 'owner'.  Michael is at least ambivalent in how he is drawn into the murderous plotting: he doesn't really want to get involved but his desire to match with Susan becomes blinded and complicit to the actions of those around him.  That Susan is condemned and put to death alongside more active and duplicitous participants in the murder of Arden is perhaps the real tragedy of the play.*

Despite that tragedy, the production does make good use of some of the underlying elements of farce in the text, including the (not-so-original) bungling hitmen Black Will and Shakebag, ably brought to life by Jay Simpson and Tony Jayawardena. 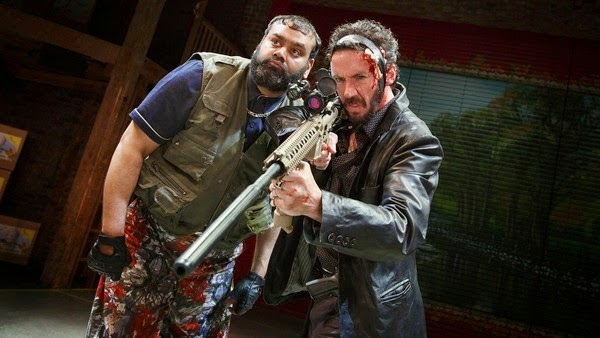 These two present violent slapstick and murderous intent thwarted by fog, timing and choices but mostly by general incompetence.  Indeed, the oleaginous Clarke is far more disturbing than they are, as it seems even Clarke's own flesh rebels against his exploits with poison and paint (rashes across his skin, gloved hands, hair and flesh that drips with contamination). By contrast the seemingly 'professional' killers - Will and Shakebag - are perpetually in more danger from each other than they can cause to others, even before the first significant head injury by unintended crowbar enters the action.  By the time the 'tragic' murder of Arden takes place, we're well prepared for the farcical raising of his body in one of his own delivery boxes above the dining table, to drop warm blood to a wine glass below.

Overall, this is a production worth seeing, short enough to be enjoyable and very well performed.  Perhaps its key problem is the baggage it comes with of being a 16th century 'true crime dramatisation'.  Taken on its own terms, this is a time-shifted tragedy whose farce makes it modern.

* The play is usually described as a 'revenge tragedy'.  But it isn't the revenge of wife or Arden as husband that defines the play.  Rather, the person who gets their revenge is a minor character: Mistress Reede.  She curses Arden to die for the "plot of ground that thou detains from me ... there be butchered by thy dearest friends".  The lands of the Abbey of Faversham from which she was evicted prove to be Arden's undoing. The play started with his discontent at having acquired the lands when his wife is adulterously in love with Mosby.  It ends with those same lands granting Mistress Reede her revenge, off stage and unnoticed.  A very strange revenge tragedy...

Posted by Lisa Rullsenberg at 1:10 pm