I blinked and it was nearly Christmas...

Apologies: I have tried - honest. But work has been demented (as FB readers will know, Neil especially has been working stupid hours) and things just ran away from me.

Over the last few weeks since I last posted:

Tonight is the works Christmas party.  Woot (not).  Neil has his at lunchtime (hope not too drunk).

No I still have not really started let alone finished my Christmas shopping or card writing... still, i am wearing some fetching tinsel.... 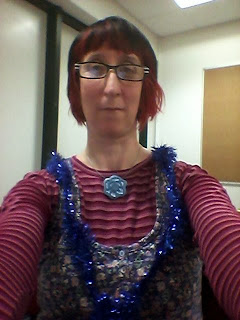 Posted by Lisa Rullsenberg at 2:24 pm