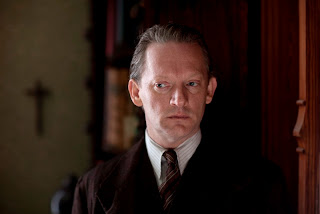 James Herbert is a funny old writer: his books have sold by the truckload (42 million according to the Gods of Wikipedia) and he clearly knows how to construct a ripping yarn.  Adaptations though have been more erratic and The Secret of Crickley Hall was the first to be attempted for TV.

In some ways it is easy to see why his works are a difficult beast to transcribe to visual form.  The momentum is different, and in some ways they don't necessarily work that well on the page either.*  Partly, this depends on if you can follow the ride of familiar tropes and scares or end up feeling like you are ticking off the cliches.

The adaptation was also affected by the (early-ish) move to change from a 90 minute adaptation to a 3 x 1 hour serial. This is an awkward maneouvre as there was probably too much material for a either a 90 minute movie version or even a 2-part 2 hour adaptation.  However, whether there was really enough done to make the three part version I'm not 100% convinced.  90% maybe. What they did to stretch things was to visualise much more of the 1940s narrative.  Now: clearly this had bonuses for me - more Henshall, braces and a cane.  Nasty wicked villain. But there was clearly slender material to work on and this didn't always work to it's advantage. Nevertheless, it was well directed and the movement between the two narrative periods was excellent.  Kudos to the editors on that one.

Plaudits:
Obviously I came for Douglas Henshall, and stayed for the ride.  With a role that is limited in what it can do - very few lines, TONS of menace, acres of villainous villainy - Henshall nevertheless sought to invest the difficult and unlikeable character of Augustus Cribben with some emotional weight. His psychosis is clear but not necessarily easily understood.  His violence is abhorrent but he is obviously a tormented figure.  I particularly liked one late scene in the production, where there is a possibility of redemption despite everything that has been happening. He hesitates, almost takes the offer, and then hardens, letting it drop.  Does he deserve the offer?  Probably not.

I thought the kids were great (Pixie Davies as Cally was adorable - and as director Joe Ahearne attested at his Q&A preview screening for episode 1, you cannot direct children, just guide them towards what you want as a natural reaction.  I certainly spotted a few lines which you just knew were her take on what she would say.  As Ahearne said, she'd tell you if a line was "silly").  Suranne Jones - who just seems to keep working with my favourite actors - and  Tom Ellis - who also has a habit of cropping up in favourite shows alongside good actors ** were well matched as the haunted parents trying to escape from/come to terms with the disappearance of their young son.

I also thought that generally the acting in the 1940s sequences was really nice from the central figures of Percy and Linnet especially.  the young boy playing Stefan was very good, but blimey he had a rough time...

As I mentioned above, the production work was great - fabulous settings well used and the editing of the two narratives was really convincingly done.  Bravo for that.

Brickbats:
The music - ARGH!  I want to shoot so many composers and sound mixers for TV.  Just tone it down, stop hamming up the melodrama and let the imagery and acting breathe!  In something as high-melodrama as this, it really didn't need the extra dosage of 'feel-emotion-NOW!'

Sarah Smart - I like her as an actress but I'm not sure this role really worked for her.  If anything she made Henshall's character seem straightforward.  A nasty piece of work but without any depth (even her inappropriate relationship left one confused.  What was she doing?)

Explaining Donald Sumpter's character WAAAY too early: no, no NO.  This should have been left unclear until episode 3, and definitely not too long before Percy's realisation.  Would have been much more powerful.

I'd have also liked a TINY bit more on the 'what happened next' elements.  The kitten was cute but even a photograph of the happy life lived afterwards would have satisfied me a little more.

Overall: I enjoyed it.  Hell, I would wouldn't I?  But it wasn't as good as it could have been or promised to be. A solid but perhaps less than fully successful 3.5/5.

* Having said that I read The Fog as a teenager and it HAUNTED me for a long time.  I still find my stomach lurch at unbidden memories of the images the text instilled.  A totally unrelated narrative to The Fog (film by John Carpenter) - a fact I didn't realise for ages and which threw me for a long time as I tried to imagine how they could have filmed the horrors of Herbert's novel (I don't think they easily could, though I suspect the Koreans could make a good attempt at the nightmares it presents).

** Ellis was also in the MAGNIFICENT 'The Fades'.  If you haven't watched that, get hold of it and shudder.  Creepy, funny, brilliant.  And that show ALSO starred Iain De Caestecker, who played Young Percy Judd here in this show.

Posted by Lisa Rullsenberg at 9:11 pm

Joe I had thought BBC America had picked it up and had been scheduled to screen it over Halloween just gone? But that may be poor info on my part...

Oh my, I missed it? We don't flow through the BBC channel much any more, it all seems to be reruns of the car guys.
When is the Dr. Christmas special scheduled?

I'm with you on music for TV series, mostly. Though having just started catching up with "Last Tango In Halifax" I'm enjoying the music in that so far. And of course Derek Jacobi could make anything worth watching.