Had brilliant fun at some of the city centre locations for the British Art Show yesterday, as this year it includes Nottingham in its touring locations. Spread across six sites, we only did a couple this weekend so there could be more to say on this, and although there were the inevitable clunkers - someone still thinks its okay to pull a Gavin Turk and submit a swiss cheese plant (1987-2005) as a work entitled "Untitled Structure" - overall the quality was very good and some of the films especially were excellent, with several works catching our attention.

Breda Beban: Walk of the Three Chairs (a Serbian artist whose work has haunting folk music at its heart with delicate choreographed movements and film editing)

Doug Fishbone: Towards a Common Understanding (a work that could offend as many as it amuses, this piece was the only one to have a 'may not be suitable for children' warning. If you see it, you might see that as an understatement...)

Paul Rooney: The Song of the Nightclub Cloakroom Attendant and The Song of the Gallery Attendant (the first is rather eerie and humourous, accompanying scenes of a flourescent lit nightclub in daytime; the second draws on his experience as a former gallery attendant at Tate Liverpool)

Siobhan Hapaska: Playa de los Intranquilos (an installation with sand and a monsterous display that includes a video projection of coconuts being smashed. Set in a vivid orange painted space, and with each shot of the cocunuts focusing on their three face-like indentations, it makes for a brutal and unnerving set-up)

All very enjoyable. It's also worth noting that whilst I'm not usually keen on what Adrian Searle says as a reviewer, I was particularly struck by his final two paragraphs on this show (from when it was shown at a previous venue):

Sometimes a theme imposes itself, unbidden. Anna Barriball blew soap bubbles over a number of found old black-and-white snapshots. The soap was mixed with ink, and the blobs, spatters and traces don't so much deface the images as insinuate their way over them like the blooms of a slow-spreading disease. Old photos, like old films, almost always remind us of death. We see time there. Barriball has simply added another layer.

Almost the same thought struck me about the old, out-of-copyright film footage used in Neil Cummings and Marysia Lewandowska's Screen Tests, a beautifully edited compilation of diligent art students at their drawing class in (I guess) the early 1930s; young men and women making faces and larking about for the camera. It was another age with other values, and very different difficulties.

Still, for me one of the most memorable elements of the show whas how we experienced it at the annex to the main Angel Row gallery space over at the former Beatties toyshop. Adam Chodzko's work M-Path asks visitors to that venue to actually put themselves into another's shoes to walk through the experience space. 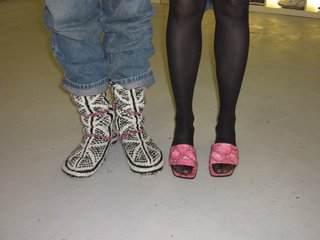 So should you make time to see this exhibition if you haven't already had chance at the BALTIC or at Manchester? Well, contemporary art isn't to everyone's taste - a fact I am fully prepared to accept even though I know most of the reasoning for not liking it can be based on the most flawed misconceptions. But give it whirl. As Jarvis once sang "Try it. You might like it. But you might... smudge your lipstick..."
Posted by Lisa Rullsenberg at 8:40 pm