The League of Youth is an early work by Ibsen, and is currently being staged by Nottingham Playhouse. I'd certainly recommend this production and it was nice to come home after the play to catch up on the Guardian review for it. 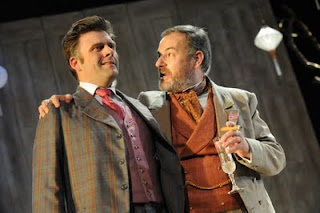 It was a shame that the audience for this wasn't larger: given the canny use the production makes of extras scattered in the auditorium who join in and are enthused by the politicking on stage, there was a danger that the number of bodies onstage would outnumber the audience. They're missing a treat though, and as the play runs until 1 June, I certainly urge a visit (and someone to pick this up for a run eleswhere).

It's also a very timely play, as for all the specificity of Norwegian politics, its resonances are very notable. Not only politician's general 'swayed by the circumstances, protecting their own' but also a fine attack on 'liberals' and sexual/gender power.