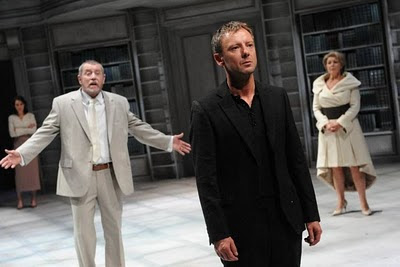 It is perhaps more than a little unfortunate that timing meant I saw this production a comparable two years on from seeing Tennant's storming performance at Stratford.

But I'll try and shy away from direct comparisons at the moment and try and assess the production on it's own terms, even though pretty much no one else has... The Telegraph even begins it's sub-heading "In comparison with David Tennant..."

So what did the Crucible production give us? Well, Simm is very watchable - boyishly attractive (though I know not to everyone's taste) and I'm not sure it's ever possible to produce a really BAD Hamlet. There is too much to appreciate in the text and the plot to feel disappointed at spending time with this play.

Additionally, this was clearly an audience that was much less familiar with the play text than is often possible after so many Hamlets have graced our stages and screens. This was most noticeable in the end scenes when Gertrude *SPOILER* drinks the cup of poison (apologies: I'm assuming you know this!). Both Helen and I noted that the extremity of reaction - truly horrified gasps at what she was doing - was nowadays pretty unusual to experience, but was actually rather refreshing. If this production got in some newcomers to Shakespeare and to Hamlet, then that's no mean feat after so many others have crossed the public sphere, and has to be a positive. Certainly I really enjoyed being part of such freshly felt audience emotions.

I also liked the wintry setting, a chilly, austere - almost barren set, with a balcony area that allowed characters to look down onto the rest of the stage. Occasional snow added to the chill, for this was definitely not a Hamlet for excessive emotions (Though I'll tackle Nettles performances as Claudius and Ghost later).

Mostly I liked Simm's performance - a bit over-crisp in pitch at times (diction isn't everything), but he was an interestingly irked Prince nonetheless. Simm does a neat turn in malevolent smiles and bewilderment and there are flashes of these scattered through the play, most especially around his supposed friends Rosencrantz and Guildenstern, those faithless pals from University. Simm was also particularly good in the 'get thee to a nunnery' scene where his inability to disguise the love he felt/once felt for Ophelia is touching - a portrayal that captures his desire to get her away from him, if she knows what's good for her. It was noted by Kate Bassett in the Independent at least:

"John Simm's Hamlet is most touching in his tenderness towards Michelle Dockery's Ophelia, kissing her as if forgiving her paternally enforced aloofness without a second thought. "

Unfortunately, for me, Michelle Dockery - freshly in people's mind's from Downton Abbey (which I haven't been watching) - wasn't the most convincing Ophelia. She was suitably fragile, but perhaps too flat in her emotions to my mind. Still, she carried off some lovely outfits.

That doesn't sound good, does it? I don't want to be too harsh on her, because getting the balance of madness and youthful affection for both family and Hamlet is no easy task and it's probably one of the roles hardest to pull off because it gives so little to do in the normal range of emotional expression. But Dockery's lack of expressiveness occasionally undermined some of Simm's better work in the play.

Because as good as a Hamlet needs to be, the role can stand or fall on what else - who else - is around him. Because what Hamlet depends on is the relationships that are established, demolished, undermined, destroyed around him.

Why else would we care how harshly Hamlet acts towards Ophelia if we can't believe in the idea that once he DID love her? There's an early moment in the production, after Claudius makes his obsequious claim of possession on Gertrude, his new-ish Queen, when the guests depart to leave Hamlet alone --- here, Ophelia hesitates, both she and Hamlet in anticipation of spending time together, but she is disappointedly forced away by her father Polonius. (Hugh Ross is fast-speaking Polonius, verbose but not distracted: a dutiful royal servant with strict ideas of propriety). And Hamlet looks far more broken by this abandonment than by the revelation of his uncle's callous murder of his father. It suggests there could have been a far more emotional Hamlet here than we are eventually allowed, and I think the fault lies less with Simm's Shakespearean inexperience than in the rest of the casting.

For example, Colin Tierney, last seen by me as the alternately chill and passionate Ejlert Loevborg in the touring production of Hedda Gabler, here makes for a rather chill Horatio as well. There are a few moments where he comes across as a wry model of what perhaps Hamlet would want in a sibling - smart, observant, willing to be there for him - but a lot of the time you can't quite see what either party get from the friendship. Whilst the duplicitous Rosencrantz and Guildenstern can be forgivably false in their level of friendship with Hamlet, it is surely crucial that Horatio is demonstrably emotionally committed to Hamlet --- confused as to whether to believe in the madness for sure, but nevertheless loving and trusting in his old friend's dilemma. Here, Horatio seems almost on a par with R&G for presenting a level of friendship that baffles why Hamlet would ever spend time with this person, let alone that they would come to offer comfort and remain to support Hamlet through his madness AND bring him back from near murder in England back to court.

So again, whilst there are sparks of something more interesting underneath, the lack of an emotional core to the relationship damages the production.

The show yesterday wasn't helped by a Laertes that sounded as if poor James Loye had a frightful dose of flu (if his voice lasts out the final work, I hope he gets a good rest after that). Still, it was a lively sword-fight. And Barbara Flynn is sexy and maternal as Gertrude in her closet scene with Hamlet, and it is a solid reliable performance from her overall: certainly she conveys a suitably mortified fury at Hamlet's accusation that she's too old to be interested in sex. But she does not seem wounded enough by Hamlet's mourning, his distance. Again, one would not want the play to be pitched too much as melodrama, but this IS a drama of heightened events and as such there does need to be some sense of emotions.

And the real problem for the play is that the one person who DOES bring heightened emotions is John Nettles as Old Hamlet and Claudius. He plays both roles with villainous relish and lascivious venom, bringing to the ghost of Old Hamlet a rasping anger (I'll ignore less charitable accusations of asthmatic wheezing) and to Claudius a hands-on grotesque delight in having captured his brother's wife and his power. This is a sour Claudius whose movements bring a little too much of the pantomime to mind -- Abanazar in Aladdin anyone?

Still, there is a perverse cruelty in Claudius that brings a nice edge to the play, but it isn't quite enough to compensate for the grimaces and shoulder shuffles as he revels in the pleasures acquired by being the usurping brother.

So overall this is an interesting but not entirely convincing Hamlet. It works, but not quite, and not as well as one might hope. With more time to settle down, and a slightly different tone to a few of the performances, this could have been far more enlightening of the endless nuances the play can offer. A 4/5 mark if I'm feeling generous, but realistically 3.5. Nevertheless worth seeing.
Posted by Lisa Rullsenberg at 11:30 am

We get the new Sherlock Holmes next week - you never said it was set in modern day - looking forward to another young looking guy in a familiar role.