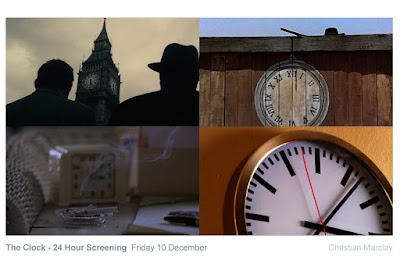 Nottingham has currently gained quite an artistic coup: the opening exhibition of the new British Art Show 2010 BEFORE it comes to London (or anywhere else in the UK).

Spread across three venues - New Art Exchange, Nottingham Contemporary and Nottingham Castle Gallery and Museum - the show provides a snapshot of contemporary art practices (last time we ended up not wearing our own shoes).

So far, we've made it around two of the three venues (you get into the Castle for free if you visit the other two venues first: usually the Castle is a paying venue for non-Nottingham residents, and we live just outside the city limits).

Still, my highlight by a country mile is sadly a work not being exclusively shown in Nottingham (though I really hope that Nottingham residents and visitors take full advantage of it):

Also available as a WHOPPING 720 page book, The Clock is a magnificent video installation showing... well, clocks. And watches. And time passing. All constructed from thousands of film clips --- in 'real time'. It is an utterly addictive experience -- we did approx. 11.25am to 12.15pm, and then approx 12.30-1pm. And then headed back for 4.10-4.45pm. You sit and find yourself physically Lost in Time (scroll for picture). I could have easily stayed for the day. If only the day long screening wasn't a work day...

What's annoying is that most of the reviews around focus on its current screening in London rather than the Nottingham installation. Even the Huffington Post reviews it -- but AGAIN, no mention that Nottingham is getting its fair share of the fun.

Which is a real shame because I would really like more people to take advantage of seeing this magnificent work in Nottingham while they can. Nottingham's New Art Exchange describe The Clock thus:

[Marclay's] new work, The Clock, features thousands of found film fragments of clocks, watches, and characters reacting to a particular time of day. These are edited together to create a 24 hour-long, single-channel video that is synchronised with local time. As each new clip appears a new narrative is suggested, only to be swiftly overtaken by another. Watching, we inhabit two worlds; that of fiction and that of fact, as real-time seconds fly inexorably by.

These clips from several thousand films, are structured so that the resulting artwork always conveys the correct time, minute by minute, in the time zone in which is it being exhibited. The scenes in which we see clocks or hear chimes tend to be either transitional ones suggesting the passage of time or suspenseful ones building up to dramatic action.

But to my mind, this is all just a fancy way of saying 'spot the clip!' because frankly this was the most fun I've had in ages in an art gallery.

There is a charming interview with Christian Marclay from the Economist - acknowledging both the team of assistants in his film watching, and his editing technology - but mostly I urge you to see the installation.

What I found so enchanting is that alongside the expected - indeed, essential clips - such as 'High Noon' at noon and the Robert Powell version of 'The 39 Steps' with THAT scene hanging off Big Ben...

... you also get less expected snippets such as quick glimpses of 'The Quick and the Dead' (which also has noon as a key timing point).

But there are also some nice clips from non-film sources such as John Simm as Raskolnikov pawning his watch in the TV adaptation of Crime and Punishment. Some scenes pass in a second, others are languidly included but the main feature is that time keeps passing. I would happily spend my days dipping into this fascinating work and if you see nothing else from the diverse range of artworks included in the British Art Show, make sure you see this.
Posted by Lisa Rullsenberg at 2:42 pm

I would end up watching those old movie clips all day. Thanks