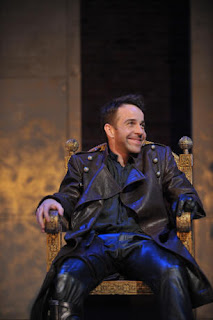 Jonjo O'Neill's Ulster inflection brings a  lively and surprising tone to Roxana Silbert's production of Richard III at the Swan Theatre this year.  I've not seen the play on stage since I saw (Sir) Ian McKellan's version in 1992, and missed seeing Kevin Spacey tearing up the stage with terrifying and seductive aplomb last year.  A shame: but then I may not have been able to enjoy this version as much.

For this is an impish, wilful, tormenting, deluded Gloucester, who becomes King Richard III with daring and relative ease.  Is he scary and evil?  Not in the usual way: he's manipulative for sure, and plays with those around him with the capriciousness of someone frustrated at their position in life and sometimes stunned at his own capacity for manipulation (as in his delirious buttonholing of a guard after wooing Lady Anne [Pippa Nixon] - it's a kind of "Did she just let me do that?!").

He's also fairly spry in his constrained body, scuttling and emphasising his limitations as he sees fit to suit his needs and means.  He's also clearly pathologically beyond the edge, as when he wrestles with one of the young princes and near strangles the child in his fury.  O'Neill plays Richard as a wry and sly smiling villain.  This is a Richard who grins - whose smile, whose villainous smile - brought to mind the lines from Hamlet:

And he knows he is in a position of power to wield the need to laugh at his jokes, and force agreement, who will turn in an instant on those who even hint at not conforming to his will and needs. He dares us to laugh at his guile and gall, even as we know he has controlled and caused so many deaths.  When he becomes haunted, when he starts to sink under the weight of his own distrust and manipulation, the disintegration is all the more alarming - because we've kinda been rooting for this teasing, vile creature, one who has carefully kept his own hands largely clean and engaged us in being compelled to go along with his climb to the top.

As ever, the production is tremendously well put together and I was especially pleased that Paola Dionisotti topped her very fine performance in King John with an exceptionally furious prophesying banshee turn as exiled Margaret.  Similarly good was Siobhan Redmond as Elizabeth Woodville.  (And my god, that woman always looks amazing as she keeps on giving cracking performances).  Brian Ferguson is an arch spin-doctor Buckingham to Gloucester's rise to be Richard III: and he falls as all spin-doctors fall.  He who hesitates is cursorily abandoned.  And it was good to see Alex Waldmann, so fine as King John, re-appear as Catesby, prepared to follow his master's whims.

Some reviews have criticised O'Neill for being too comedic and too unconvincing at the wickedness, but is that really what we need from all our Dickie 3 performers?  Is there no space to play the role differently, to bring out different aspects?  This may not please traditionalists, but it is an enjoyable and provocative version and you feel pretty wicked for having laughed with this villain so easily.
Posted by Lisa Rullsenberg at 1:27 pm