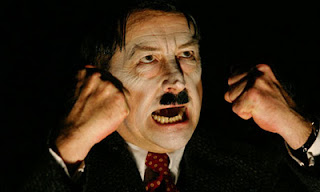 The Guardian gave it a 4 star review when reviewing this production at Liverpool earlier this month of Brecht's The Resistible Rise of Arturo Ui.

This fast-talking new translation of Brecht's satire is certainly worth seeing, though whether you will keep pace with the dialogue is more debatable (The Observer review intimates this concern).

Last night was preview night in Nottingham (it is on until 12 November here) and the theatre was pretty full (albeit lots and lots of teenagers). Actually, it was a very attentive audience as far as I could tell, and the cast got a very rapturous reception at the end (deservedly so). Ian Bartholomew as Arturo Ui is especially fine.

It is not quite as well done as the version of The Caucasian Chalk Circle which toured to Nottingham in 2009. And inevitably the analogies between cauliflower sellers in the USA and the rise of Hitler and Nazism in Germany are as subtle as a brick through a window. Nevertheless, I'd still recommend audiences to see this production of Arturo Ui in the UK asap: it remains a powerful work, funny and terrifying all at once.
Posted by Lisa Rullsenberg at 8:19 am

James said...
This comment has been removed by a blog administrator.
10:12 am