And breathe.... overload in the realm of Doctor Who - anniversary weekend madness

I'm still feeling a bit giddy actually, like I've had the biggest sugar rush ever invented: a total overdose of Doctor Who-ness.  Good for me?  No idea.  Probably not.  Don't care.

I kept my promise (mostly): no spoilers pre-episode.  I've been scarcely reading DWM for months (skipping with eyes closed over the news pages and even avoiding the covers on occasion).  I gave in over the mini-episode 'The Night of the Doctor' because the star of it created such a stir that I couldn't avoid or resist it.

But apart from the 50th trailer - bringing together the Doctors so far, I was good.

I stuck my fingers in my ears and la-la-la-ed my way through several weeks of speculation, building to a positive avalanching crescendo as the day approached.  Radio, television, everything.  Heck, even the BBC World Service joined in! It's a good job I frequently subvert the fact that I totally need glasses to read now and all-too often try to access social media on my phone: this helped in la-la-la-ing there as well.  If I can hardly see and I only post, well I couldn't get spoilered.

I wasn't alone in this venture: one of my students (bless her) was doing the same, and so was one of the staff at Nottingham's Broadway cinema, where we went to watch an encore screening today.  Like me, they too had succumbed to the pre-episode, but beyond that we had been 'good people'.  No I don't know how (or why) we did it: it just felt right.

Part of me wanted to be with the 'we' watching the live simulcast in cinemas, but I knew I needed to soak it at home first, in private.  What if it was truly awful?  Wouldn't it be horrible to be with others and feel nothing but total disappointment, confusion, despair? What if THEIR reactions rubbed off - negatively - on me? (And yes, I'm aware of those who truly felt that way about the episode: I respect them, and can see their points which are no doubt founded on sincere belief and interpretation, and yet with all my heart, I don't care and cannot go that way).

So for the first viewing I watched it at home, with my 'semi-we', the not-quite-anoraked but long-time part-converted Neil. (Despite occasional protestations about my obsessive interest in Doctor Who, we've worked out that his partial conversion phase has been going a LONG time. We calculated, pace the emergency TV purchase moment on Wednesday, that when we had bought a portable TV in haste many years ago when our first TV blew up - smokey cathode ray and all - that the timing of that rushed purchased, carryied portable TV across Wolverhampton, was for... yup, the Paul McGann TV movie of Doctor Who.  How nothing changes....)

At first we set up with just an upright standard lamp on: "too bright" said my semi-we, so into darkness we went with just the glow of the TV.  Save the day?  This was definitely The Day of the Doctor.  A dark room, a winter's night, and all of time and space ahead of us.

Oh my.  Was it what I wanted?  I honestly do not know.  Was it what I needed?  Yes.  Ten took a lot of hearts into him when he appeared and when Tennant regenerated it broke a lot of those hearts and it felt right and reflective that his parting words were "I don't want to go".  We didn't want him to.  Plenty have still not come to terms with Eleven (and as both an established and yet also Ten fan, I nevertheless have thought Eleven very good indeed, though not always well served by the scripts/direction).

Anyway, this time around there was a smile to Ten re-uttering the departing words (not least because they had been deployed so magnificently by David Bradley as William Hartnell just two days earlier in the frankly BREATHTAKING 'An Adventure in Space and Time'*).  Ten's traits were both mocked and lauded, noted and admired... out there somewhere, the Tenth is still running and that will always be happening in our hearts.  Having him back, the same suit, the same smile, the same screwdriver... it felt like coming home, and yet also a coming home that was growing up.  Like going away to University. I'd have him back for good in heartbeat (or two), but as he'll always be there - part of whatever Doctor there is - and yet I also know I can't expect that it can be forever.  Change...?

I'm rambling: I've hardly slept in days - excitement and exhaustion in equal measure.  In between everything I went to see Bellowhead and had a great time, but ended up looking like I'd stepped from a shower of sweat.  It's kinda been a bit much really.

What I loved (too many things to list):
What didn't work as well:


And after this, I watched 'The Five(ish) Doctors Reboot', which qualifies as the best way that the current production team could sanction including the old Doctors without having them in the episode itself.  All hail Five, Peter Davison, as magician for this witty and warm subversion of the anniversary.

As I said, today we did it all again in public (some couldn't quite manage to do this properly: 3-D jokes made by Tennant about things pointing out the screen.... oh dear).  This made the adventure alive all over again, with extra 3-Dness.  A pleasure to behold.  Overdone in parts, underdone in others.  But overall a pleasure: I wouldn't say Moffat did us proud (as the OTT after-show claimed) but it was what I needed.  A baffling celebration of something wonderful, confusing, and amazing. 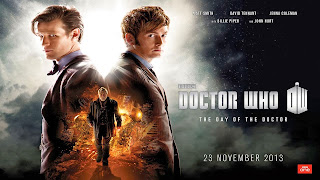 I want to see the 100th anniversary episode, and not just because it will be in 12-D.

* 'An Adventure in Space and Time' was Mark Gatiss doing a hymnal to Doctor Who and to BBC Television Centre.  Beautiful, poignant, bittersweet and perfectly rendered on every level, this will for some be *THE* 50th Anniversary treat, perhaps more so than the anniversary episode itself.  They have different beauties to my mind, but Bradley deserves every award going for his portrayal of the First Doctor.

Posted by Lisa Rullsenberg at 8:22 pm